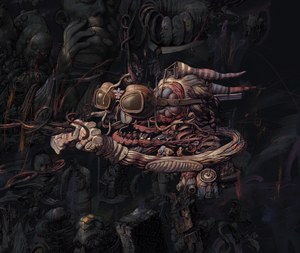 Ace's Low is a thought in Disco Elysium.

The Insulindian Civil War was not the first war to see the use of hybrid airships on both sides, but it was the *coolest*. For an entire decade folded multi-rotor fighters got into dogfights above Revachol, Ozonne, Semenine, and the Arcade Islands, spitting death at one another. They flew over sandy beaches and shot each other out of the azure sky, crashing into city blocks and setting island forests ablaze. The Ace's Low was a custom among revolutionary brigades, performed after multiple kills. Lieutenant Kitsuragi seems fond of it… why?

For the rest of the world the Ace's Low is *just some cool Revachol* thing, politically neutral. In Revachol it still holds revolutionary connotations. Also, have you looked at Lieutenant Kitsuragi's *clothes*? He wears a bomber jacket, just like the ones worn by aerostatic brigades. And those cargo pants look like they could fit tools for hotfixing your burning aerostatic... you should ask him about this.

Completing this thought allows you to discuss Kim's clothes with him.