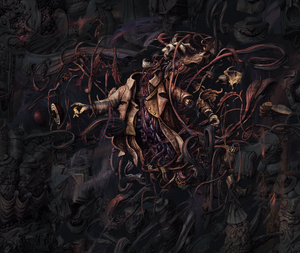 Anti-Object Task Force is a thought in Disco Elysium.

Take a look at your hands. See how bruised they are? See those little scars? This is Exhibit A. The material world is holding you back. Containers, mailboxes, doors, chairs -- they are all your enemies. Always have been. Atoms themselves are in on the conspiracy, forming shapes and structures that you hate. You are energy stuck in a body. You are spirit trapped in matter. Break free! Beat up that lamp post! Let it know just how much objects *suck*.

Behold: the Anti-Object Task Force has assembled. God's avenging angel, arrayed against the lower emanations of the Darkened One: shoe racks, tape recorders, motor carriages. And doors. So many doors. You're not just pounding it all to pieces. You’re *reforging* the universe. From the anvil of the heavens to the worms below. Indulge in it. Be bold. Have an *impact* on the shape of Creation. Out of the furnace of your rage -- a new reality! Also, you should trash your room *again*.