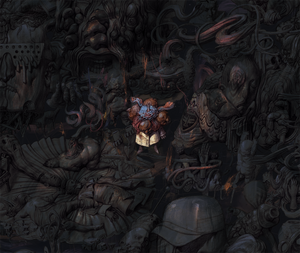 Arno van Eyck is a thought in Disco Elysium.

The question won’t leave you – why did the melody line from a broken and discarded tape fit perfectly into a song played by some speedfreaks in a frozen tent? Can it be a coincidence? Maybe it’s the hand of the Man-Machine himself, in his attempt to craft a perfect song. Maybe Egg Head is actually Arno van Eyck in disguise!? Eyck? Egg? Hmm...

Okay, so Egg Head is clearly not Van Eyck in disguise. Van Eyck is an Oranjese disc jockey -- but those people get around. Especially in Revachol, in the clubs on Boogie Street. Perhaps he stayed here for a short stint and discarded part of the song he was working on. Just threw it away. And then it ended up in the hawthorn tree. But why? Did he think it was *retrograde*? It wasn’t. Perhaps he caught a glimpse of the future and did not want for it to arrive just yet. Perhaps the city whispered the topline to him and he was frightened by it?