Coal City is a location in Disco Elysium. 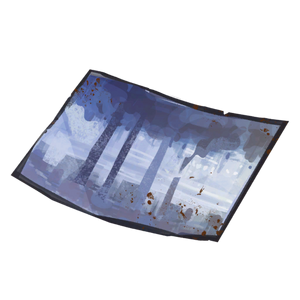 Located in shadow of Mount Saint-Martin, Coal City was a boom town, back when coal extracted from countless shafts near the city was needed to power Revachol. By '52 it's a wretched heap of closed-down mines even west of Jamrock, on the dusty slope of Monte Martin. The remotest possible area of Revachol, no one even wants to exploit those people any more. The reason for the collapse is simple: The coal was supplanted by petroleum from the ocean floor and hydropower from the Esperance. Everything crumbled. These days, only the weakest remain in Coal City. Their hopes of getting rich linger in the defunct shafts under their feet.[1]

Below the old mines lies L'Ossuaire Municipal, Revachol's underground cemetery. Les petits rats brave the underground passageways, trying to get to Le Royaume, a vast network of dungeons and burial chambers, where the filippian kings were interred, with their doctors and their admirals. Mausoleums, burial chambers, and leaf gold still remains on the Double Door of the Morning. The whole network dates back three centuries. Children under 14 go underground, looking for artefacts to sell to foreign museums -- and for fabled relics. They hunt after rubies, melchiorite, lapis lazuli plundered from Safre and Seol during the time of the Suzerain, in the burial chambers of the kings: Grand Old Filippe, Guillaume II, and even in the mausoleum of Filippe the Opulent.[1]

Two kilometres underground, in a winding shaft along whose walls mirrors have been placed so that daylight may eternally fall upon the richest of all the kings, the mausoleum contains untold quantities of gold -- and that special, purest-of-the-pure magenta cocaine favoured by Revacholian royalty.[1]

Few *petits rats* return from the shafts -- and even fewer find what they're looking for. A small child steps out of a black tunnel, with silver trinkets in her pockets. All around her, white snow on the extinguished coke furnaces, and on the weather-worn shacks, where fathers beat their sons after drinking. The snow melts on your fingers, turning to water.[1]