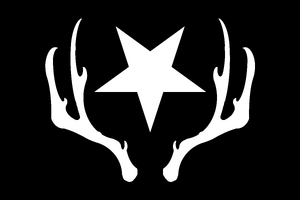 Star-and-antlers, the symbol of the Revolution.

Communism is a political alignment in Disco Elysium.

Communists, also called Communards,[2] Mazovians,[3] Materialists,[4] or Socialists,[5] are leftist revolutionaries who follow the writings and teachings of Kras Mazov, a Graadian historian, economist, and founder of scientific communism.[6] Ever since the collapse of the Antecentennial Revolution, communist movements have become fringe and persecuted, and split off into many ideological variants.[7]

Communist theory, also called dialectical materialism,[8] or critical theory,[9] is a type of historical analysis based on the concept of class warfare,[10] believing that the historic role of the proletariat social-class is to rise up against its bourgeois oppressors,[11] producing, through a process known as the Dictatorship of the Proletariat, a state which protects workers' interests.[12] Although the process contrasts with anarchist theory, the two groups were allies during the Revolution,[13] though anarchist movements have largely been forgotten since.[14]

Although the precise ideals of the communists varied between the major branches of the Revolution, they had some common elements, exemplified by their universal symbol: the star-and-antlers.[15] The symbol was created 40 years before the current century, eventually being adopted by Mazov and the communards.[16] The wreath of antlers represented a society that could both exist alongside and rule over the natural world,[17] while the five-pointed star, a social-democratic symbol, was turned upside down to symbolize the toppling of the old order.[18] The colour white was chosen as it is the colour of peace,[19] also seeming to complement the black used by anarchists.[20]

Graad, the birthplace of the Revolution in the year '02, was also the first nation to establish a socialist state.[21] Led by Mazov, Premier of the Communist Party of Shest and Graad and head of the Eleven Day Government, the Graadian proletariat held power over the nation for six years, being known for burning churches,[22] and establishing labour camps for bourgeois opponents in southeast Graad,[23] particularly Yekokataa.[24] In the year '08, the final siege on the State Day Palace in Mirova took place, during which Mazov is said to have committed suicide.[25] The official anthem of the Graadian party was 'Brave Children, Favourites of History'.[26]

After the downfall of the Mazovian government, Graad appears to have been quickly resettled into Moralist International administration, becoming a safe haven for former enemies of the Revolution such as Revacholian King Guillaume Le Lion.[27] By the year '08, Graadian nations had taken part in the Coalition of Nations' assault on the Commune of Revachol.[28] The nation would go on to conceive of Graadian realism, a literary genre known for being dense, depressing and difficult to read.[29] By the '20s, Graad had started a process of economic liberalization known as the Yugo-Graad Spring, though it was considered a failure, resulting in violent riots from '27 to '29.[30] The Post-Revolutionary Graadian state is also known for its proxy war with Safre, committing many atrocities in the village of Co Hoi.[31]

In Samara, communism first sprouted in the Hsin-Yao Commune, located in an industrialized area in the southern part of the isola.[32] The commune was known for its weapon production, particularly the Triangong 4.46,[33] which was supplied to Revacholian revolutionaries as military aid.[34] The commune's official anthem was 'Boy with a Scythe / Golden Sun'.[35] The commune was eventually expanded into the Samaran People's Republic (SRV), following the assault on Graad, during which Ignus Nilsen, Mazov's second-in-command,[36] led an evacuation to the Samaran isola.[37] The state, officially considered Nilsenist-Mazovianist, was never overthrown, though it is considered to have degenerated from its original ideal as a "socialist utopia".[38]

In current times, the SRV is governed by President Sapormat 'Sport' Knezhinisky, a repressive and corrupt leader who has ruled for over three decades.[39] The SRV's government encourages high levels of physical fitness as a means of defense against capitalist aggression,[40] and considers bear wrestling its national sport.[41] The Republic's Ministry of Information is known for producing dubious data,[42] though a lot of propaganda is also produced against it.[43] The state is also known for producing and donating resources to humanitarian aid,[44] but their exports are generally considered low quality.[45] In spite of the nation's distancing from classical Mazovianist ideals, it still utilizes the five-pointed star as a logo,[44] and considers Ignus Nilsen its founding father.[46] It also has a large contingent of infra-materialists.[47]

In Revachol, communism gained traction as a result of the ruling of King Filippe III,[48] the latest in a series of disastrous Suzerains.[49] The Commune of Revachol was officially established in the 7th of March in the year '02, transmitting its legislative document Le Décret de Mars[50] across interisolary borders using technology seized from the FELD R&D Building in Martinaise.[51] The Suzerain at the time, Guillaume Le Lion, fled the country, leaving his nephew Frissel the First to face the Insulindian Citizens Militia,[52] and the Parti communiste d'Insulinde.[53]

The leaders of the commune were Dual Commissars of Revolution Julia Dobreva and Jean Abadanaiz.[54] Serving alongside them were the political commissars, ensuring that the revolutionary army would answer to civillian control and abide to the commune's ideology,[55] of which one example was Iosef Lilianovich Dros.[56] The army was managed using a hierarchical system known as the Décomptage, which was based on dual-leadership.[57] The commune also counted with the support of a bourgeoise class who wished to overthrow the Suzerain, known as the Ultras, or ultraliberals,[58] though they would come to join sides with the Coalition of Nations in the Commune's later years.[59] The official anthem of the Commune was 'La Revacholière',[60] and the Ace's High[61] and Insulindian Lilies[62] would become its symbols.

After the death of Frissel, the communards would have absolute control over Revachol, building fortifications along the Martinaise Inlet[63] and a number of interconnected underground bunkers.[64] Communards also attempted to build the People's Pile, an amateur particle decay generator meant to provide energy to all,[65] though that project would result in a catastrophic ecological disaster.[66] In the year '08, the Coalition would come to retaliate, leading an attack known as Operation Death Blow, opening fire over Martinaise, La Delta and Stella Maris indiscriminately.[67] Despite this, the Commune would only officially fall two years later, after the disappearence of Dobreva and Abadanaiz,[54] when the Revacholian Instrument of Surrender was signed, turning Revachol into a Zone of Control subject to the Moralist International.[68]

However, conflict would continue even after the surrender. Areas of Revachol West such as Jamrock, Faubourg, Couron and Boogie Street still held active communard cells, resulting in extensive persecution that would last into the '10s,[69] and even the '20s.[70] By the time of the '30s, Revachol had reached a level of stability,[71] with The New helping to introduce free market economy into the region, despite a foreign democracy.[72] Since then, only small communist groups have remained in Revachol, with the ideology being somewhat popular amongst students[73] and union members. The Revachol Citizens Militia, founded by survivors from the ICM, would continue to hold onto revolutionary customs, such as the Décomptage.[74]

In Gottwald, the Gottwald School for critical theory believes that intellectuals are a class incapable of performing revolutionary change, only capable of inspiring it in others through critique.[75] They also seem to develop extensive psychological analysis.[76]

The Mazovian Economists, also referred to as Econoclards, though both names are pejorative, are a moderate school of Mazovianist thought, which advocates for a transition to socialism through economic reform, not revolution.[77] Alongside the Gottwaldians, they represent the two largest strands of Post-Revolution communism.[78]

Infra-materialism is a fringe school of communism, developed by followers of Nilsenist thought based on theories developed in his later life.[79] Infra-materialists believe that political thought is capable of manifesting in material reality as ideological plasm,[80] granting advanced enough critical theorists the ability to influence reality by only thinking.[81] Infra-materialists split communist societies into three separate levels of ideological intensity,[82] with third-level civilizations being capable of abandoning the laws of physics entirely.[83] Although infra-materialist thought is largely shunned on a global scale, it is accepted and developed in the SRV.[47]

Saramiriza also has a history of communism, though its relation to the Revolution is unclear. The Saramirizian Lounge Jacket is traditional wear for old members of the Saramirizian Communist Party.

In Mundi, Ubi Sunt? is said to be partial towards socialism.[84]