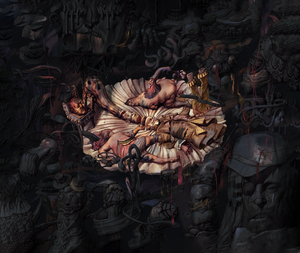 Guillaume le Million is a thought in Disco Elysium.

Whatever happened to Guillaume Le Million, who -- with his amber mane and sparkling teeth -- beguiled the tattered remains of the nation? While you suffered and suffered, did he dematerialize in a cloud of cocaine dust? Or did he simply stand in the corner and melt into the slendering *New* lines of some starlit boîte de nuit twenty years ago? Spare a thought for his great ass too! Or wait... maybe he became a police officer in Revachol West! Hmm...

Bad news: Guillaume le Million did not become a cop. In '38 he went on a tour to the Hsin-Yao province in Safre, where he died of auto-erotic asphyxiation. His body was found hanging from a decorative dragon tree in his junior suite, amid drug paraphernalia, unwholesome objects, and the Sylvia Trainor single "Wonderland" skipping in the background. And yes, you can take this as a metaphor for Revachol in the Thirties. And also as a warning.