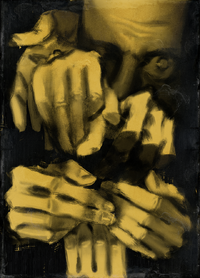 Hand-Eye Coordination is a Motorics skill in Disco Elysium. Ready? Aim and fire.

Hand/Eye Coordination loves the interaction between you and things that fly in the air. It enables you to catch coins from mob bosses, shoot straight, and understand firearms intimately. Want to know the precise make and mark of a pistol? Hand/Eye Coordination’s got you. Want to shoot someone with it? Ditto.

At high levels, Hand/Eye Coordination makes you deadly – supposing you’ve a weapon in your hand. But once you do, Hand/Eye Coordination will compel you to take the shot – even if it’s not the best approach. At low levels, however, you’ll be even more of a disaster in waiting. Because when the guns go off – and they always do – you’ll probably hit the wrong target.