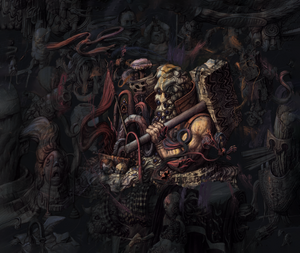 Mazovian Socio-Economics is a thought in Disco Elysium.

People think Communism was some crazy idea that had its comeuppance 40 years ago. A fever that shook the world, never to return again. They were right. Until *he* woke up today – a spiritual corpse responsive only to the call of Commodore Red, prostitutes, and Kras Mazov. For him, Communism is still a *thing*. He will single-handedly raise the Commune of '02 from the oceanic trench where it has been resting, covered in ghosts and seaweed! He is the Big Communism Builder. Come, witness his attempt to rebuild Communism in the year '51!

0.000% of Communism has been built. Evil child-murdering billionaires still rule the world with a shit-eating grin. All he has managed to do is make himself *sad*. He is starting to suspect Kras Mazov *fucked him over* personally with his socio-economic theory. It has, however, made him into a very, very smart boy with something like a university degree in Truth. Instead of building Communism, he now builds a precise model of this grotesque, duplicitous world.