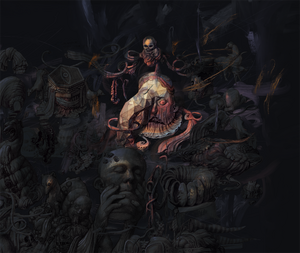 Motorway South is a thought in Disco Elysium.

At the edge of the map the landmass begins to disintegrate – into pure trigonometry. The ocean melts, becoming a tangle of sines and cosines, the mountain range turns into a sharp-angled azimuth. Its green rain shadow dithers, like music turning into a waveform. And then vanishes. This is the end, a half-remembered textbook from your childhood – the porch collapsing on the edge of the isola. A transition from reality to pale. A single vector shoots out, like a rocket. It's the Motorway South, splintering off from the known pale! *To where*? Where does it go?

The lone vector stretches in your mind’s eye into the wild pale yonder. For an unimaginable distance, forgetting, forgetting... Until you can no longer remember anything – no cities, no mountains, no oceans. And finally – no vector. Nothing remains. A blank space with no point of reference, where only one type of motion is possible. The motion of a human throat, swallowing. And then it comes to you: to reach the end of the Motorway South is to be *unborn*. You've had this thought before while aimlessly wandering the streets of Jamrock. A lost piece of the man you were. A dark hope.