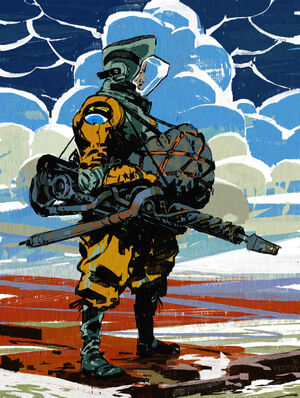 A worker in the pale.

Pale is a phenomenon present in the world of Elysium.

The world of Elysium is distinct in that it is not a single contiguous landmass, but consists of vast continents of matter - isolas - surrounded by a separative tissue.[1] This tissue is called the pale and is the most dominant geological feature of the world, the interisolary mass, at a ratio of 2:1 to matter.[2]

The phenomenon covers 72% of the known surface of Elysium, interfering with any attempts at orbital flight, and protruding in gray flares, prominences, and arching over isolas.[3] The Occident-Revachol-Graad nations have been conducting experiments with weather balloons in the lower ionosphere since the thirties, resulting in the image of "A dark grey corona,[4] a rarefied envelope of matter surrounding the darkened disc of the planet".[5]

The Pale does not have a perceivable appearance. It is achromatic, odourless, and featureless, the "enemy of matter and life".[6] Therefore, it can only be measured through the matter that surrounds it.[7] Where matter borders the pale, the resulting border is an uproar of matter, evaporating into the pale, considered "a great vision".[8] The area of transition between the world and the pale is called "porch collapse": a grey mist with cold vapour, known to house a specialized form of fungal microorganism.[9]

Pale is difficult to describe and measure, as it is something whose fundamental property is the suspension of properties: physical, epistemological, linguistic.[10] The further into pale you travel, the steeper the degree of suspension. Right down to the mathematical – numbers stop working. No one has ever passed the number barrier since the discovery of the pale and it may be impossible. [11]

One of the few measurable effects of the pale is that it is expanding at an unknown rate.[12]

The pale was thought to be impregnable, perpetual. Irene La Navigateur, the Queen of Suresne, sent eight expeditions, one after the other, into the mass at the edge of the world. Five of the crews did not return. Two others lost their minds.[13] After years of trial and error the eighth expedition returned -- sane and intact. They told of a new continent of matter. They told the queen and her councillor, Dolores Dei, that the pale had began to condense, day after day, hour after hour, minute after minute,[14] leading to the discovery of a new isola: the Insulinde, the "freckled face of god".[15]

Their travel was made possible by the fact that, using a device known as a pale latitude compressor, is possible to force dimensions on the pale, bouncing radio waves from one end to the other and shortening the path.[16] However, the only real advance in pale transit is the speed with which an aerostatic craft can pierce it -- less exposure leads to fewer adverse effects later.[17] Aerostatics are hybrid airships, necessary as conventional rotors or jet engines no longer add velocity after the point of reference for motion is suspended once they cross from near pale to far pale.[18]

Over-radiation, caused by prolonged exposure to the pale, is a horrible feeling and international standards strictly limit civilian travellers to six days of pale exposure per year.[19] Members of the Entroponetic Business Class are specifically cleared and trained for 22 days of pale travel annually.[20] Workers who transport goods through the pale are known as paledrivers,[21] and some experience overradiation through vivid flashbacks, living out past memories from lives that may or may not be theirs.

In order to transmit radio signal between isolas, a number of pale-based repeater stations are needed, though working on those is said to be an incredibly dangerous and mentally taxing job.[22] On occasion, signal that is routed through the pale gets mixed up, sending instead conversations recorded elsewhere or years ago.[23] In exceedingly rare cases, the pale may transmit information from the future.[24] [25]

There are also signs of pretermodern crossings. Successful navigation of the pale relies not just on technical know-how, but intensive psychic preparation.[26] Some of these tactics have been known for thousands of years, such as Volta do Mar,[27] which resembles the process of writing poetry.[28]

Entroponetics is the scientific study of the pale. The pale has been studied for thousands of years in one way or another and the most recent iteration of it comes from Graad. The study of the pale reaches back as far as 6,000 years, to the Mundi isola and the Perikarnassians, who called it the Western Plain.[29] They had not travelled the entire circumference of the Perikarnassian super-isola and assumed it was simply a feature of the west, not yet aware of its omnipresence.[30]

Some consider isolary entroponetics, that is, the idea of pale being able to form from inside an isola, a hoax. However, the phenomenon is proven,[31] one example being the point of origin inside the Dolorian Church of Humanity in Martinaise, and appears to be under investigation by the Moralist International.[32]

The exact origins of the pale are unclear. Logical positivists claim the pale exists as pockets of anti-matter, capable of damaging and confusing the mind through extreme sensory deprivation. Dialectical materialists, on the other hand, say that it is composed of manifested information, or manifested past, capable of degrading memories into itself.[33] The Insulindian Phasmid, speaking to Harrier Du Bois, supports the later interpretation, referring to it as a "human pollution", and claiming that every animal and plant is scared of humanity for it, believing it will destroy them all.[34]