The Revachol Citizens Militia, or RCM, is the police force for Revachol. 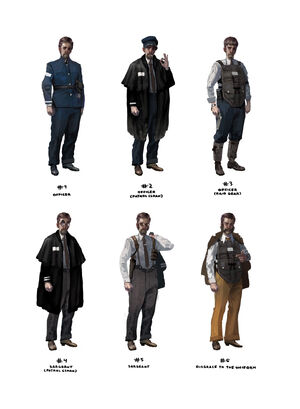 The RCM is the self-organized peace corps of the occupied city of Revachol, the RCM operates within a legal twilight, yet its authority is rarely questioned.[1] It was either formed by the Coalition Government to restore order to the International Zone after the Antecentennial Revolution or formed by the citizens of Revachol.[2] The RCM may be a descendent of the Insulindian Citizens Militia, or ICM, in structure and purpose.[3][4][5]

The current motto for the RCM is "Justice, Union, Prudence, and Force." Previously, it was "After life, death; after death, life again. After the world, the pale; after the pale, the world again," a common exaltation in Dolorian sacralism. However it was changed for being too "subservient" to the Moralintern and too "feminine."[6]

It is implied that the RCM is male-dominated.[6][7][8] However, its female officers are put to the same standards and do equally well as their male counterparts.[9]

Many of the RCM's fashions, even weapon preferences, borrow heavily from classic Vespertine cop shows.[10] Moreover, Dick Mullen, the popular fictional detective referenced by officers of Precinct 41, is Vespertine.[11]

Officers widely practice the Stations of the Breath: a holdout from Pre-Dolorian burial rites. It involves placing a hand on a deceased person's chest for a few seconds.[12] If the body of the deceased isn't present, there is a variation where one places a hand against their chest then extend the other outward, palm flat to the air.[13]

It is generally recognized that the RCM has its difficulties. It relies on donations,[16] and, by extension, good PR to continue running.[17] Harry can claim that the RCM is chronically mismanaged, deeply corrupt, and completely outmatched.[18] If Harry asks for pay raises and generous benefits for RCM officers from the Mega Rich Light-Bending Guy, Kim Kitsuragi defends the RCM by stating that the RCM's problems are mainly structural. They lack clear lines of authority and their system of performance reviews disincentivizes inter-precinct cooperation,[19] as made apparent by Precinct 41 and Precinct 57's rivalry over Martinaise.[20]

Moreover, the RCM's reliance on volunteers has a detrimental effect on its effectiveness. Clearing 10 cases a year is enough to put a policeman in the 90th percentile.[21] This is reflected by statistics: in '50, the year before the in-game events, more than 71% of murders in Revachol went unsolved. In Revachol West, that number was closer to 85%.[22]

RCM officers are paid very little.[23] In the Northwest Region of Revachol, an officer's average yearly income is 5,500 reál, unadjusted for rank.[24] As such, many cops take bribes to survive.[25]

The RCM is split into specialized divisions. The ones known are listed below:

Kim Kitsuragi jokes about the existence of the Remote Viewers Division, which investigates the paranormal.[33]

RCM forces are divided into Precincts, each with it own Station. Precincts are tasked over districts in Revachol. The ones mentioned in-game are listed below:

Presumably, each Precinct has a Communications Officer, who takes calls from other RCM Officers, and a lazareth (hospital), which provides medical services[34][35] and a space to perform autopsies.[36]

The RCM uses the Décomptage system, modeled after the dual-leadership system employed by the left during the Revolution, which in turn was developed by last century experimental psychologists in the University of Koenigstein.[37]

The known ranks are, from highest to lowest:[38]

There are also satellite-officers and yefreitors, kinks in the system that go in-between ranks.[38] A satellite-officer is an officer whose partner has been quickly promoted through the ranks and has their own rank rise accordingly.[39] The title of yefreitor is added to an officer's rank when they decline a promotion to a higher rank.[40]

Junior officers are usually teenagers; the minimum age to join the junior officer program is fifteen.[41]

Lieutenants are the highest rank to still do field work,[42] and each lieutenant is responsible for two sergeants and eight patrol/junior officers, along with their personal affairs.[43]

The honorary rank of Detective signifies the officer's ability to handle all four phases of the incident chain, those being: 1) Investigation of the scene; 2) Initial examination of the victim; 3) Field autopsy; and 4) Transport of the corpse to the morgue.[44]

RCM officers go through training, though exact details of what this entails is unclear. It is mentioned that this training is expensive.[45] In cut content for the Damaged Ledger, it is said that trainees pick a civil specialization to keep the city running, such as fire safety, first aid training, building safety regulation, etc.[46]

It is RCM-wide policy for officers to pass Elementary Radio Operations.[47] This implies that different precincts have differing requirements to become a fully-fledged RCM officer.

The RCM's responsibilities are defined by three main acts—the Emergency, Wayfarer, and Aliments Acts—that keep Revachol in a laissez-faire stasis that benefits the Moralintern and Coalition government.[48]

The Emergency Act, also known as the Emergencies Act, is implied to be the most important of the three acts. It represents the half century of Coalition control in Revachol and also grants the RCM the authority to police its citizens.[49] Under this act, it is technically not illegal to give bribes to officers of the RCM, as long as they are properly logged as donations.[50] Under the Emergencies Act of Trade and Aliments, businesses are not obligated to reveal trade secrets to the RCM.[51] It is also implied that the Emergency Act makes it difficult for unions to form.[52]

The Wayfarer Act governs human interaction in Revachol, designed to limit the authority of local institution and keeping the city in limbo.[53] It's provisions prohibit RCM officers from demanding operator licenses[54][53] or evicting citizens from a public space,[55][56] and presumably grants the right for a citizen's words to not be used against them in court.[57]

Only mentioned by name.

Laws not explicitly listed as provisions under the three acts are jotted down below:

However, the RCM employs relay codes for communication,[66] used in-game by communication officers Jules Pidieu and Alice DeMettrie. Below are a list of known relay codes and their potential meanings:

Criminal offenses can be addressed in a multitude of ways. For minor offenses, misconduct fines ranging from 20 to 250 reál can be issued by RCM officers. For severe offenses, the fine can go up to 1,000 reál, but this requires special paperwork.[74] Officers can also write a station call, which mandates that the person who received the slip must show up at an RCM Station at the written date and time.[75] Felons who receive jail time, on the other hand, are sent to the River Esperance Correctional Facility, run by the Coalition, dubbed "Reunion" by its inmates.[76]

Pre-detention can take up to several years.[77] Murder is punishable with four years in Reunion.[78] 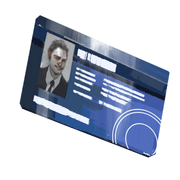 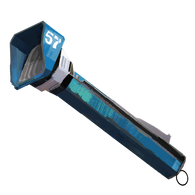 Each officer of the RCM is equipped with a badge,[79] a gun with non-jacketed, cast conical ammunition,[80] insignia,[81] paperwork,[82] and clip, marked with perforations. The insignias look like hollow white rectangles, but are in fact halogen watermarks bearing "RCM" and a pattern that symbolizes the street grid of the officer's district.[83] The clips track three vital statistics: years of service,[84] cases solved,[85] and the number of kills.[86] Flashlights (manufactured by Grundstellung RAO) are also provided to officers.

Below are the three types of forms in RCM paperwork, used by Harry Du Bois and Kim Kitsuragi:[87]