Some kind of Superstar 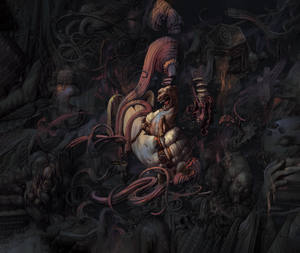 Some kind of Superstar is a thought in Disco Elysium.

First, let's make this absolutely clear. No one is saying you're an *actual* superstar in the groupies-and-cocaine, riddled-with-hepatitis-C, strikes-a-lionesque-pose-with-a mic kind of way. You’re not Guillaume le Million or Davy Dewis, no. You're a *metaphorical* superstar. You bring that rock-and-roll authenticity and passion to a line of work where people don't expect (or want) to see it. Where, some would say, it doesn't *belong*: law enforcement.

They say the world isn’t ready for a rock-and-roll cop. No one *wants* their state monopoly on violence to be mixed with celebrity worship. They 'claim to know' it would be dangerous for detectives to rise to the ranks of demigods and have sexual encounters with barely-legal cover girls. It would be 'insane', they say. To all this you say: Fuck off and die. In a cool voice. You people have no idea how *good* these cops are gonna get. They're gonna crack twenty cases a day. In the future, cops will be like astrophysicists. Or prime ministers. Or prophets. And you’re the first one.