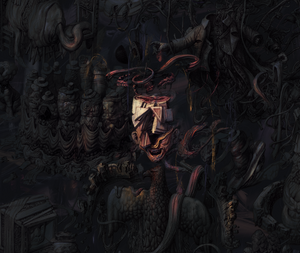 The Litany of Contact Mike is a thought in Disco Elysium.

It’s time once again to return to *The Twenty Things You Like To Say About Contact Mike*, the boxer who is, apparently, a paragon of open competition. It really doesn’t get *any* better than this. *Any* better. Both inside and *outside* the ring. Stop. Point at someone. Someone in the distance. Point your finger at him. He *will* point his finger back at you, vaulting an impassable gulf of finance and privilege, to...

…5,000-1 rank outsider! No one saw it coming. The mantle of a game changer demands intangible qualities. Fights are not won -- you’re thinking, instead of doing detective work right now -- fights are *made*. Blow by blow, let’s take it *Mike to the Mikey*. Some low-intensity part of you has entered a sports-cliché driven fugue state. And it’s not necessarily a bad thing. Also -- Mike *knew* what it took to win: he just wanted it *more*.