The Suicide of Kras Mazov 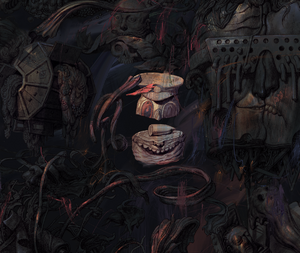 The Suicide of Kras Mazov is a thought in Disco Elysium.

There's something you can’t get out of your head. Kras Mazov, the father of scientific communism, the Premier of the Communist Party of Shest and Graad during the Antecentennial Revolution, head of the Eleven Day Government, sideburn-toting, bearded figurehead of the movement... shot himself in the mouth? And died? One day in his cabinet, as things were collapsing around him? Just gave up? That's not good propaganda, is it? “Вe a communist, shoot yourself in the mouth.” Something about this irks you...

It's clearly a lie. Kras “Kak Ras” Mazov didn't shoot himself. Reaction was on the counter-offensive, the State Day Palace in Mirova was surrounded. He was either assassinated or died in the bombing. You might even have evidence to support this, somewhere in your brain. Mazov was never given a state funeral by the communists. Some people even say the body that was recovered from the ruins wasn't his. There. Good. Hero restored to glory. Carry on, comrade.