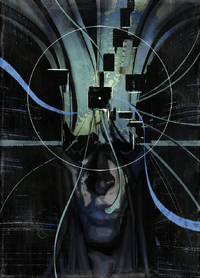 Visual Calculus is an Intellect skill in Disco Elysium. Reconstruct crime scenes. Make laws of physics work for the Law.

Visual Calculus verses you not only in the laws of the state, but the laws of nature. It enables you to create virtual crime-scene models in your mind’s eye. You’ll see how a bullet shattered the glass and from that trace its trajectory with mathematical precision. You’ll also count so many footprints – and at a glance discern shoe size and design; as well as the height, weight, and gender of the one who wore them.

At high levels, Visual Calculus makes the world reveal its secrets to you – but you may be so absorbed by your mind-diorama, you don’t notice as crooks steal your pants. However, at low levels, your mind’s eye will be blind. Reconstructing crime scenes will be difficult without outside help.