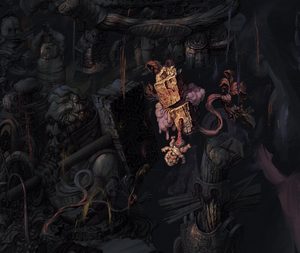 Volumetric Shit Compressor is a thought in Disco Elysium.

Your shit is *apart*, and it's rather unbecoming of a cop and a human being. It's supposed to be the opposite of that: *together*. Compressed in a small area. To achieve a solid level of shit-compression, squeeze your butt-cheeks together for 30 minutes. Do something similar with the two hemispheres of your brain. Talk to people, maybe that will help.

Bizarre scientific news from Revachol West today, where a police officer's shit has been observed at a pressure of around 495 giga-decimals. These metallic hydrogen levels of shit-togetherness were thought to exist only at the center of collapsing stars, not law officials. It remains to be seen how long the shit-singularity lasts.