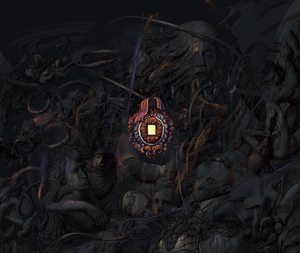 White Mourning is a thought in Disco Elysium.

You see yourself from above. You’re passed out on the blue tiles of the hostel room floor. Even from this distance you can see your eyelids flutter -- at the mention of what? A great white object, letting out its sweet smell, like a Lily of the Valley. The little man’s forgotten its name, but he still remembers the feeling. And look, he moves! The feeling animates him. He instinctively reaches out for the feeling's best friend -- a bottle of Commodore Red. He puts on his disco clothes and gets smaller and smaller...

...and the little guy gets smaller and smaller as you rise above the doll house world. You see him out in the snow, on the streets, in the shop on the corner, and, finally, in a matchbox house. Sitting by the window, white flowers on the windowsill. You can smell them from up here: it's awful. A white mourning. A modern death. Divorce, or something similar. All you can do is put more distance between you and him, make him smaller. Make him less *you*.