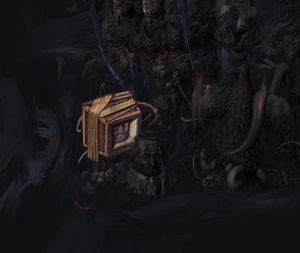 Wompty-Dompty Dom Centre is a thought in Disco Elysium.

It's Wednesday evening and something heinously exciting is under way. People have gathered beneath the billowing roof of an oddly shaped trophy building, sipping wine and exchanging opinions. 29-year-old wunder-twins Guy and Keith Joost are the stars of the show, with their bomber jackets and white sneakers -- head curators of this art exhibition. It's the wompty-dom-di-dommiest event of the year and all the cool kids have RSVP’d. Where are you, if you are not there?

You're at home, stupid cop, not with the art crowd. You hate them, everyone hates them, even they hate themselves. It's nauseating -- an industry built on sprezzatura and sparkling wine. And, let’s be honest, tax evasion schemes. The Wompty Dompty Dom Centre is the heart of this unholy symbiosis of esthetics and tax optimization, and now that you've internalized it – you can have a piece too!